Boosting sales in a world shaken by Covid19 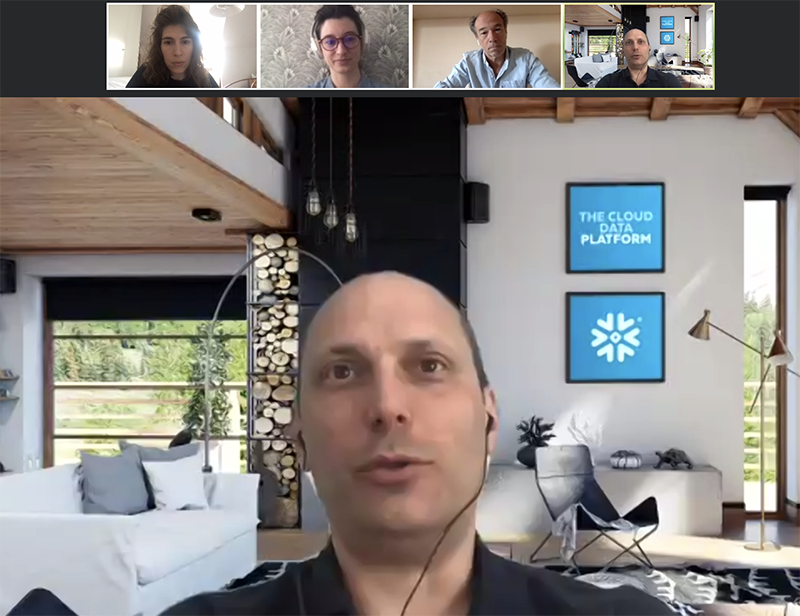 On the 28th April, the Shaker hosted a webinar which was titled ‘how to boost sales in a world shaken by Covid19.’ The event was led by Ivan Smets, Regional Vice President at Snowflake, Christophe Verdenne, Vice President of EMEA sales at ReachFive, and Caroline Franczia, Founder of Uppercut-First, working in sales and strategy support. The webinar was extremely informative, with our speakers focusing on discussing the value proposition of their solutions, the organization of their teams targeting accounts and the change in mindset of the teams regarding positioning.


Firstly, the speakers gave a short overview of their respective companies. Snowflake is a cloud data platform that offers secure and easy access to any data with near-infinite scalability. Reachfive has designed a unified platform for Customer Identity and Access Management. The solution provides a frictionless customer journey, federating omnichannel consumer identities with secured and protected access, respecting GDPR rules. Uppercut-First accompanies the European start-ups in their sales strategy by giving them an undeniable advantage in their go-to market and scale-up plan.


The discussion began with a question directed at all three speakers: what are the best practices that you have put in place during this period of containment? The question was placed into context by Christophe, who used the analogy of a moving bicycle. He compared the importance of keeping moving during difficult times to the necessity of a bicycle continuing its movement, to prevent it from falling over. He explained that his team at ReachFive started having daily morning calls, both to ensure that everyone was working on the same page and creating a good positive dynamic, and to boost morale in the team. He also highlighted the importance of listening to the customer and understanding both them and their prospects. While your working habits are changing, so are your customers’, and so ensuring you have a deep understanding of how their needs are adapting is vital.


Christophe then took the lead in the conversation, explaining how ReachFive wasn’t used to using webinars as a platform for their events. They were very familiar with hosting physical events in real venues, but when it came to having them digitally, it became unfamiliar territory. Despite this unfamiliarity, ReachFive was very fast to adapt, and their agility to move from the physical to the digital was impressive.


Christophe also expressed the importance of being agile in a circumstance such as this, with ReachFive setting up new offers for their customers, such as a free audit, demonstrating how the company understood the hardships that the current climate would bring, and so acted accordingly. The communications sent out by ReachFive have also changed to now focus on customer benefits rather than the technical side of business. Caroline described this as allowing companies to move from a technical sale to one of value.


Ivan continued the conversation, with his explanation of what Snowflake has done to in face of crisis. Firstly, he discussed how it was vital to educate his team on the concept of controlling that which you can control. That is to say, the crisis is the same for everyone. Everyone is struggling and we all must make concessions for the good of others. However, we can control who we call, why we call them and what priority we place on each call. Maintaining a certain amount of control, even when the world around us seems anything but controlled, is so important in keeping a sense of calm. Ivan also expressed how his team became overwhelmed with the number of webinars that were being created, and so cutting down on these was the first step to regaining a sense of control.


For all speakers, it was very important to assess their team organization. Maintaining a sense of professionalism in whole team meetings, with a clear agenda and a professional tone, allowed the team to consider that working remotely was not that different from working in the office. This helps the team to create a working environment in their homes which boosts productivity. However, while these meetings are of course a necessity for remote working, what is also nice is to have various meetings to encourage friendly interaction between teammates. For example, a bring your own beer webinar in which participants can relax and discuss with their team how they are getting on in lockdown. Having a harmony between professional meetings and those that are more friendly helps boost efficiency significantly.


The topic of conversation then moved to children. All speakers could agree that the advantage of lockdown is that everybody is in the same boat. Many people have children at home and so each employee can relate to one another, creating a more human aspect to the whole situation. There exists a sort of ‘we are in this together’ attitude. The real problem exists for those with someone in their close circle who is not well, either mentally or physically. This can prove to be a real emotional burden and can make the lockdown far more difficult to manage.


Putting a more positive spin on the conversation, Ivan praised the French for how they have acted during the lockdown, and said that they have proved themselves to be resilient in constrained environments, adaptable to even the most difficult of situations and creative in the face of adversity. This strength should be valued, and everyone should be proud of how they have handled such a difficult time.


Caroline then asked about future adaptations, specifically which players will be considered in the next world? Which players will make it? The speakers agreed that there exist two categories of player that should be discussed: those who continue to learn and absorb best practices on a variety of subjects, who react appropriately and reinvent themselves, and those who do not change at all. Christophe explained that a player who was in a weak position before the lockdown will not be able to survive, a similar situation to those who have no experience in ecommerce.


This crisis has caused us to, in effect, go back to basics. We must focus even more on listening to our customers because now more than ever, their opinions and views can influence businesses on such a large scale. There is also another element to take into account: while listening to our customers is of paramount importance, we must also listen to our ecosystem, our alliances and partners. Calling a customer and pushing a product or service that they are not interested in can be a waste of time, and so it is important to turn to our ecosystem to discover where is best to focus. Solidarity is thriving at this time, and prior connections are deepening and solidifying to the extent that it would be mad not to talk to your partners about their connections, and thus you can develop your pipeline. However, the question you must ask yourself before turning to your ecosystem, is ‘how will what I’m selling help the company survive the crisis?’


With any crisis comes a magnitude of opportunities. The coronavirus may slow some and derail others, but it will also allow companies to adopt new working techniques that, while pushing them out of their comfort zone, will be beneficial in the long run. It will also reveal the shortcomings of some and act as a filter on the market. The world will become more transparent, making it easier to sell, as key focal points will emerge.


Big thanks to our panelists for sharing their expertise!


Don’t miss the next Partech Shake and Learn session! Join the Meetup Group!