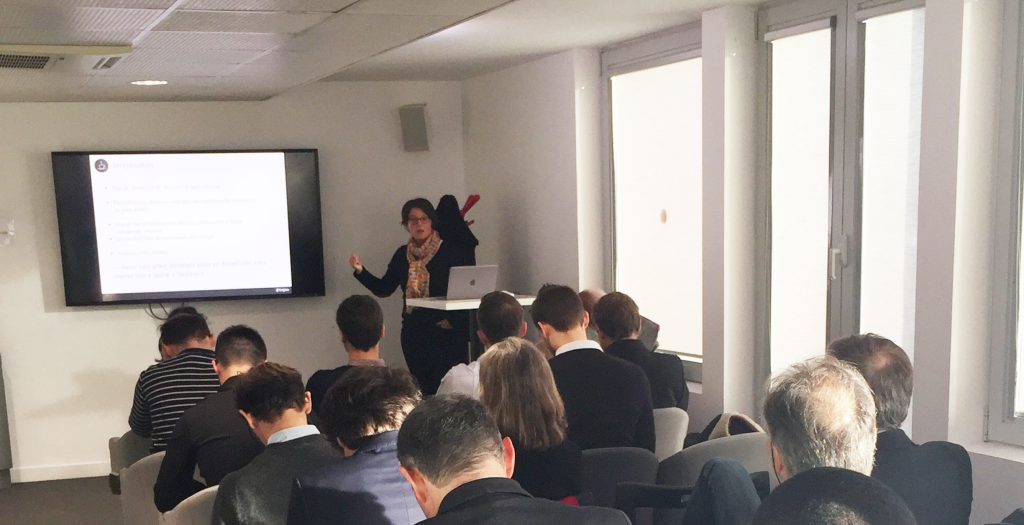 Virginie sees the world of content as currently undergoing a major shift. It is transitioning from an environment structured by CMSs (content management systems), that can distribute the same content across several platforms, to content which needs to be formatted directly on a multiplicity of platforms. In the past few years, Facebook Instant Articles, LinkedIn Pulse, Medium, Apple News and Google Post have emerged, making it possible to diversify the means of distributing content.

This transformation is taking place because of two concurrent trends: the significant development of mobile use and the widespread use of ad blockers. These two trends are increasing the significance of leading apps and major social networks, but at the expense of more traditional websites.

The extensive use of mobile gives a decisive advantage to applications released by the dominant players, including notably Google, Apple, Facebook and Amazon (GAFA). Since 2014, mobile has surpassed the desktop audience in the US, and France is witnessing a similar evolution. Mobile has become the priority device, and all signs are showing that this trend will only continue.

On mobile, 88% of internet use takes place in applications compared to 12% on mobile web, where traffic is driven primarily by social networks and newsletters. However, diversity in app use is particularly restricted. The reasons for this are that it is expensive to generate app downloads, and half of users that download an app delete it within 20 days. Moreover, on average, only 8 or 9 apps are used per phone, and never more than 3 to 5 per day. The apps of the four major players (Google, Apple, Facebook and Amazon) generally appear among the top ten most downloaded applications. This means that the content creator must be present in the applications by these four major players if it wants to be widely visible to the mobile audience.. Specifically-designed content must be posted on the new platforms.

The second major trend underway, the widespread use of adblockers, is dramatically transforming the way in which traditional content sites can promote and monetize their content.  In France, a third of desktop users downloaded an adblocker. If no advertising is visible to the user, no monetization is possible for the content site. Some content sites are already particularly affected by adblockers, especially those which target younger audiences, such as video game sites (55% of gaming site visitors have ad blockers, according to Anatomy Media in 2016). This phenomenon remains less widespread on mobile due to ad blockers not being free on these devices, but is nevertheless massive and is not about to slow down. As a result, content sites that strongly rely on advertising are increasingly tempted to position themselves in spaces which are not reached by adblockers, such as social networks.

In recent years, all major networks have developed new options for content creation and distribution.

Just last year, Google launched Google AMP (accelerated mobile pages), an open source platform for distributing content in a very light HTML format (JavaScript is not allowed), with a cache system and pre-rendering from the Google SERP. Google AMP's objective is to provide a solution for content publishers whose sites are often too heavy – and  hence too slow – for mobile viewing. This solution makes it possible to increase display speed by 15 to 85%, and it increases the return rate within 7 days.

This new format is growing rapidly with 7,300 developers, 1,900 code submissions in May 2016, 150 million pages created in AMP format in the Google index and 6 million new pages per week. The format works with most CMSs including Drupal, Joomla, Prestashop, Magento and WordPress. Major content sites such as eBay and Reddit have already shifted their content to AMP format. In terms of monetization, several ad servers are compatible, but it is less than on a mobile website. Interstitials and homepage takeovers are prohibited, and Google gives priority to AMP in its mobile search results, particularly in its "Top stories" section. Articles generated in AMP format are marked with a small lightning icon.

In a similar spirit, Facebook has developed Facebook Instant Articles (FBIA) using the same lightning symbol. Content is hosted directly on Facebook and is displayed instantly. Statistics seem to show a 20% increase in click-through rate, a 70% decrease in abandonment rate and 30% more "shares". This new format on Facebook does not guarantee an audience, nor does it guarantee an increased reach. But its impact is positive, particularly for users with a slow internet connection.

Google recently tested a new product, Google Podium , during the US presidential primaries in spring 2016 and Paris Fashion Week in September 2016.  The product is a carousel of posts displayed among the top results, collected specifically for a  specific occasion and a particular theme. Content is hosted directly on Google. If such a product grows, a content producer may eventually no longer need a website.

LinkedIn also launched its own product, Pulse, to allow professionals to share their vision and use all of LinkedIn's social functionalities to promote their content directly on the platform.

Medium also makes it possible to host all content directly on the platform, which is AMP-compatible, with its own domain name and monetization through advertising. The only cost is content production. Brands such as Starbucks, Intel, GE and BMW have developed their platforms  on Medium.

In the US, Apple launched Apple News, a news platform. It offers access to Apple's audience, but still has limited statistics and restricted monetization options as it is limited to Apple's iAd Workbench ad server.

Video content is experiencing the same transformation with the launch of Facebook Live and Netflix Originals, Twitter and Facebook wanting to buy television rights, and Apple TV offering American football. In audio, Carplay and Android Auto are also growing.

Do websites still make sense in this time of massive distribution? For brands and media, it is no longer certain.

The development of all of these platforms should be seen as an opportunity. Previously, content was costly to produce and difficult to distribute. Today it can be distributed widely. Minutebuzz for example only publishes on Facebook and has shut down its website.

There are several risks though. The main one is to become fully dependent on these platforms, or even GAFA-dependent. Then, you could lose visibility and your brand might suffer from disintermediation; you could lose control on your content. Finally there is the risk of lacking analytics data.

But there's no doubt that with the growth of all these new platforms, brands and content producers will need to deploy strategies that involve having a presence in multiple spaces depending on the target audience and possibilities for monetization. This new environment will require winning strategies, which will be developed following the initial experiments that are already underway.