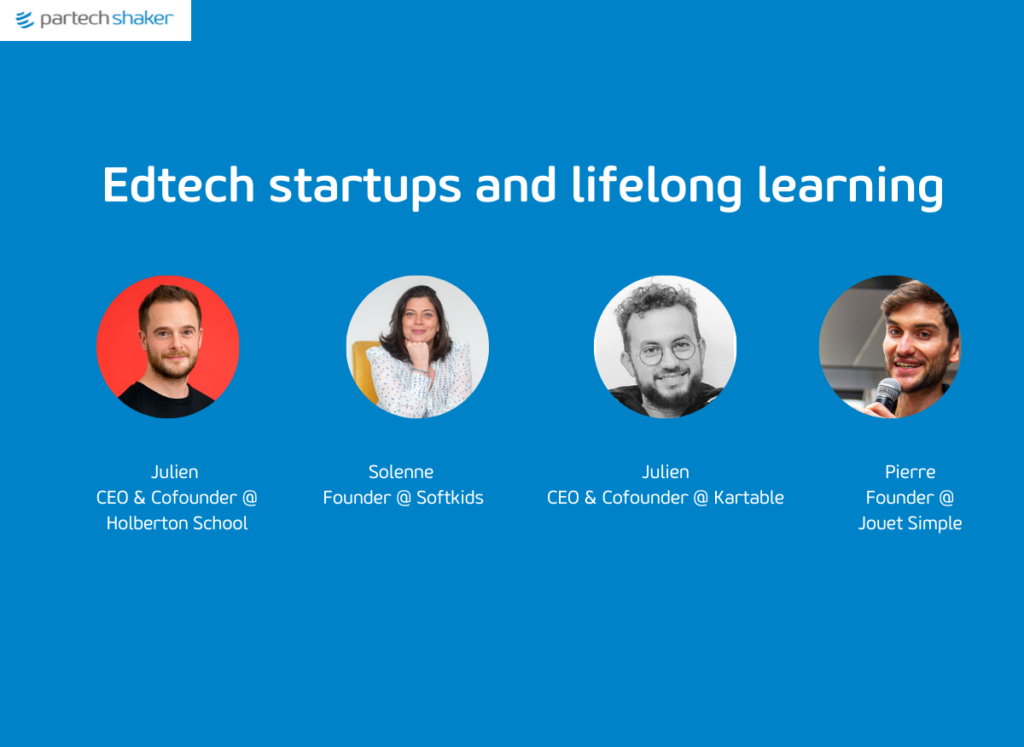 On Thursday 28th May we were lucky enough to welcome 4 edtech giants to our Shake & Learn webinar on edtech and lifelong learning – with over 50 people signed up! We heard from: Julien Cohen Solal, Julien Barbier, Solenne Bocquillon-Le Goaziou and Pierre Vernon.


Who were our speakers?


Julien Cohen-Solal is the CEO and Co-Founder of Kartable. Kartable is the tutoring school that offers courses and exercises in all subjects from elementary school to high school, which is now attracting over 2 million French students!


Julien Barbier is the CEO and Co-Founder of Holberton School. Julien co-founded Holberton in 2015, since which time, it has transitioned from being a coding school in San Francisco, to an ‘OS of Education’ that offers franchised campuses and education tools across the US, LatAm, Europe, Asia and Afica..


Solenne Bocquillon-Le Goaziou is the CEO and Founder of Softkids. Softkids is the platform championing the development of soft skills for children. Launched 2 years’ ago, they released their first product a year ago. And attention investors! Solenne’s looking to raise funds. 😉


Pierre Vernon is the founder of Le Jouet Simple; the children’s toy brand that launched at the start of the year. Produced in France, Pierre’s toys can be found in specialist shops and on the Internet. Pierre joked that he has never really grown up: he’s worked in children’s toys throughout his life, having even launched a power ranger at Hasbro!


When to fundraise as an edtech startup?


The question of fundraising was one which cropped up time and again during the discussion: pre-COVID, few investors were interested in edtech. But not anymore! Julien Barbier explained how now is the time to raise funds if you’re an edtech entrepreneur: remote learning brought on by the health crisis has carved out a significant market. Pierre also noted that he had been approached by quite a few funds: evidently the toy market is booming.


However, education still remains a difficult product to market. The idea of ‘selling’ education – especially in France – is somewhat uncomfortable as it is not perceived as something you may buy. This is not necessarily the case in the US or in China. There, attitudes towards paying for education is somewhat different: with expense meaning quality. Julien Barbier noted that parents in the US can pay between $2,000 and $2,500 per term just for daycare for their children!


In the US, depending on the states, the only college (university) level education which is free is that of community colleges and these are reputed to be fairly sub-par.


Edtech around the world


Clearly, there are some significant cultural differences between the US and France. But what about the rest of the world? We’ve already noted Holberton School’s expansion into LatAm.


One huge continent that attracts all speakers’ interest is Africa. With the whole continent reliant upon mobile banking (in a way we are just starting to see peek through in the US) – Africa was coined a ‘champion of tomorrow’ by the speakers. But it remains to be seen whether edtech will penetrate the African market; while their ecosystem is financially innovative, there is doubtless significant socio-economic disparity between Africa and France/US which might hinder edtech’s appeal.


However, in terms of expanding your edtech internationally, all speakers convened upon the fact that this is something you should not fear! While you will need to develop your product differently, there is a worldwide need for education. And as Julien Cohen noted: if you launch a great product for the French market but are too afraid to launch an English version (for example) what’s to stop someone stealing the product and adapting it for English speakers?!


In conclusion, edtech = tech for good. It doesn’t have to be something for pushy middle-class parents (as it is often perceived to be); instead, it can replace parents and teachers when they cannot manage. Of course, all children need face-to-face contact: but in the same way that the introduction of tech has massively innovated virtually all industries, why should the education industry be any different?


If you’d like to learn more about the work of these speakers, check out their websites and their LinkedIn profiles: