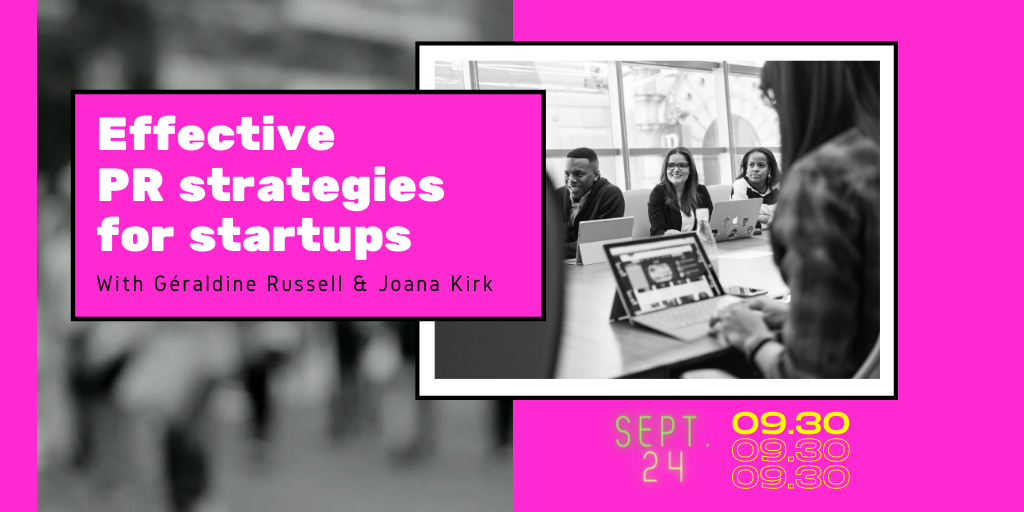 On 24th September 2020, the Partech Shaker hosted a Webinar as part of its Shake & Learn series titled ‘Effective PR for Startups’. The engaging discussion was led by Géraldine Russell, a journalist for Maddyness, and Joanna Kirk, an expert in PR and founder of her own PR agency, JKPR. The webinar was mediated by Isabelle Tresson, Communications and Marketing Coordinator at Partech. The two speakers explored a wide range of topics from attracting a journalist’s attention to media exclusives. At every point there was stimulating advice and insight as well concrete examples to make sure the participants benefitted from their invaluable expertise.


The first topic of discussion was the question of what interests a journalist? Géraldine led the first part of the discussion drawing on her personal experience working for Maddyness. On approaching journalist, she suggested you put yourself in the shoes of a reader, ask yourself what interests you as a reader? What do you want to read? After reflecting on these questions, Géraldine spoke about the importance of attracting the interest of journalists through offering them alternative angles from which they can write the article. Using the example of Maddyness, she illustrated that they often write about similar themes such as Company News, Fundraising, Exits and Blogs. This means it is even more important to think outside the box perhaps using interesting details to differentiate yourselves from other companies in the same sector. This will in turn, make journalists want to write about your company. Joanna entered the discussion by identifying the importance of how, the way you contact a journalist, increases the likelihood of attracting interest in your company. She underlined the importance of making your contact with journalists personal. Research the journalist or media outlet’s articles and offer them different angles based on their readership or journalistic standpoint. This attention to detail makes it more likely for them to contact you in return and builds up important relationships between your company and the media.


Following on from this, the discussion moved towards the most effective ways of contacting journalists. Géraldine emphasized the importance of Social Media, especially in today’s context. The easiest thing to do is to follow people who cover your sector which makes it easier to gauge their preferred topics and style. Isabelle suggested LinkedIn and Twitter are the two best Social Media platforms to contact journalists on due to the direct messaging service being completely open. Géraldine and Joanna echoed this, both suggesting that in your messages you make it clear and concise regarding who you are and what you want. After having established these connections, the two experts highlighted the importance of regular contact with journalists either through email or social media, updating them on the latest news or forewarning them about things in the pipeline. They both stressed the importance of not harassing journalists with information which could potentially sour your relationship with them and making it more difficult to gain Press coverage.


This led into the question of hiring an agency, a freelancer, or a full-time employee to deal with all thing’s PR for your company. Joanna led the discussion on this topic, making it clear that there is no one best solution, but all these options can offer value to your company.  Hiring a PR agency allows you to create relationships easily as well as develop a sector specific focus. Joanna affirmed that the use of a PR agency means they will require regular communications regarding new data and upcoming news. The benefit of the freelance option is that you will have access to their address book which is likely to have a wide variety of contacts. Joanna emphasized that it is easier to change tack with freelancers if the methods are not working and it only requires irregular communication, 2 or 3 times a month she suggests. Both Isabelle and Géraldine spoke of the rewards of employing someone on a full-time basis to manage all PR. The benefits of this being that it allows you to develop ideas with team members, streamline Social Media content and organize networking events. All these suggestions offered important food for thought and allowed the participants to reflect on how they could work into their business model.


The next question posed by one of our participants, moved the discussion onto the effectiveness of an exclusive versus an embargo. Joanna and Géraldine offered detailed advice on the ‘Do’s’ and ‘Don’ts’ when it comes to these to press tactics. An embargo can be effective as it helps several journalists and helps build those important relations, as spoken about in the early part of the webinar. Géraldine stressed how embargoes allow you to target different media outlets meaning the article will be written from a variety of different angles. However, both experts underlined that with an embargo it is vital that you remember precise details. These details are those such as international time zone, forewarning journalists so they are prepared and most importantly, releasing the article at the optimal time. They explained the advantage of an exclusive is that it shows the journalist that fully trust them. But, at the same time, Géraldine stated that you must make sure that what you send is what the journalist and the media outlet’s readership are really looking for. She went on to say that if this is not the case, the point of the exclusive is made redundant as you’ll have to send it on to several journalists until one is willing to take it on. Like the embargo, with an exclusive it is necessary to give the journalist advance notice so they can devote time to writing the best article possible.


The discussion switched towards press release presentation. It was agreed that an email with the press release included in the body of the email or attached as a PDF document was a good format and make sure the document is as concise as possible, with one page being the optimal length. Joanna discussed the importance of the content such as the links to websites/Social Media being clear and up to date. She also spoke of the advantage of visuals and how they add a dynamic element to occasionally bland content. Joanna went further by accentuating the need for good formatting such as the use of quotes, attractive titles, and industry buzzwords, all which help the article gain traction. From a journalistic standpoint, Géraldine advised against sending the journalists links to previous articles as it would make them feel they’re informed after other journalists who have already written about the same topic. This encapsulated a theme from the earlier topics: forewarning and personal contact allows for more collaboration and trust with the journalists.


The final question raised during the discussion was that of whether Social Media presence is a necessity. Géraldine believed a LinkedIn account was the minimum required as it aids recruitment and the reach of articles about your business. With regards to other forms of Social Media, it is up to the company’s discretion as it is not a necessity and depends on each company’s targets. However, accounts on Twitter and Facebook can be a good way to connect with people in the startup ecosystem and learn from others about how to maximize the potential reach of your company.


The two guests concluded the discussion by wrapping up all the key points about each topic and telling the participants to not hesitate to get in touch if they any additional questions.


A massive thank you to both Joanna and Géraldine for such a stimulating discussion with such varied topics and fascinating insight. 🙏


You can watch the webinar's video here.


Combien coûtent vraiment les RP
5 conseils pour bien contacter les journalistes sur les réseaux sociaux
Embargo, exclu, avant-première : comment proposer une info à un journaliste ?
Comment démarcher la presse sans l'aide d'une agence
4 conseils pour éviter à vos CP l'aller simple vers la corbeille
Comment écrire un bon communiqué de presse tout seul
68 agences RP conseillées par les startuppers (be careful, this is a list compiled by Trustfolio, based on feedback provided by users, this is not list made by Maddyness. Tip from Maddyness: with a PR agency, act like you would with a VC: do your due diligence! Ask for references, ask around in the startup community specifying the sector and ask about what worked/ what did not work and why.)


Do not miss our next Webinar or Event! Join our Meetup group now!