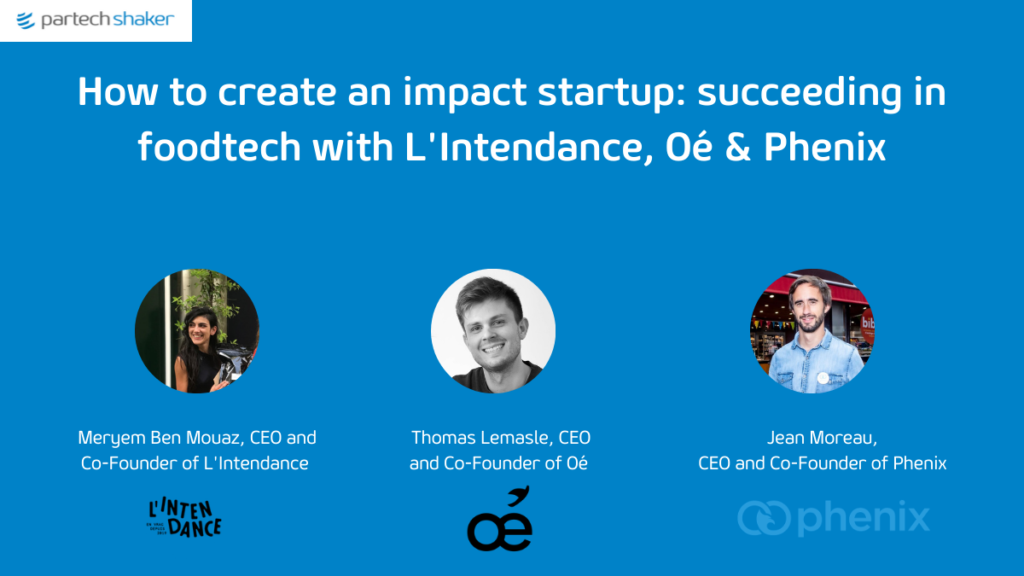 On Thursday 10th June we were lucky enough to unite 3 experts from the French foodtech sector, whose three companies share missions and ethics in line with Gen-Z level requirements! Presenting our speakers:


Thomas Lemasle is CEO and Co-Founder of Oé. Oé is the impact startup that works hand in hand with committed winemakers to produce the best organic wine! Thomas decided he wanted to become an impact entrepreneur during a long stint at Danone. He met his co-founder, FX, by chance. A 17-strong steam, Oé has partnerships across France: notably across Alsace, Languedoc, Bordeaux, Côtes-du-Rhône.

Meryem co-founded L’Intendance in 2019. L'Intendance is the first website that allows you to do all your shopping without plastic, deploying a simple deposit system for glass items. Meryem has a background in VC and Adtech, and she thanks her data-driven foundations. The team is 12 people-strong, the product operating off a website (an app could be to come 😉).

Jean co-founded Phenix in in March 2014: the ‘#TechforGood’ solution for reducing waste. In short, it is an anti-waste app that has been launched to accompany supermarkets, local shops, producers, citizens and associations towards zero waste.  220 employees-strong, Jean has grown his start-up the classic way: through Seed, Series A and Series B funding. Before founding Phenix, Jean worked in Finance and M&A; however, he tired of this career – all money and little impact. Phenix has also launched in Italy and Belgium.


What is the market looking like? Do people want to buy greener?


Thomas pointed out that there has been a big growth in the market recently; with more and more people wanting to buy greener produce. And this does not simply involve the consumer: each step of the supply chain is looking for greener products (kitchens, restaurants etc.). Meryem noted that she has also seen a real evolution of the consumer – not necessarily just woke Parisians (les “bobos”), but all sorts of profiles from across France. Indeed, for apps like Jean’s, which sell unsold food from supermarkets, the price is much cheaper. Jean’s customers aren’t necessarily just looking to save the planet, they’re looking to save money too.


How to use social media to promote the brand?


We all know there’s all sorts of apps out there. So, it’s all about how you make yours stand out. Jean noted that he uses personal branding to his advantage: particularly when focusing on B2C. But if going for B2B, you need to de-personalize your branding slightly to make it more professional. Jean uses mainly LinkedIn and Twitter as he finds both have the best ROI. However, the struggle with being a Founder and launching yourself into the game of personal branding is that it gets more difficult to delegate: BFM Business doesn’t want to interview the Head of Communications, even if they’ll reeling off the same script as the CEO.


Fundraising: is it sexy?


When Phenix was launched, there were very few impact funds and impact investing was considered not nearly as ‘sexy’ as it is today. Meryem noted one downside is that impact investment is (or certainly was) far more frequent at Series A / B rather than at Seed stage. Many impact startups also experience a lengthy wait between Seed and Series B.


Having said this, the landscape has changed quite significantly. Launching an (impact) startup is now far easier than it was a few years ago. In 2014, impact investment was treated with suspicion, almost anti-capitalist (!); now, it is becoming a prerequisite for VCs. So, in conclusion: if you’re looking to found an impact startup? Forget a buyer’s market: it’s a founder’s market.


If you’d like to learn more about the work of these speakers, check out their websites and their LinkedIn profiles: