How to convince US Venture Capitals 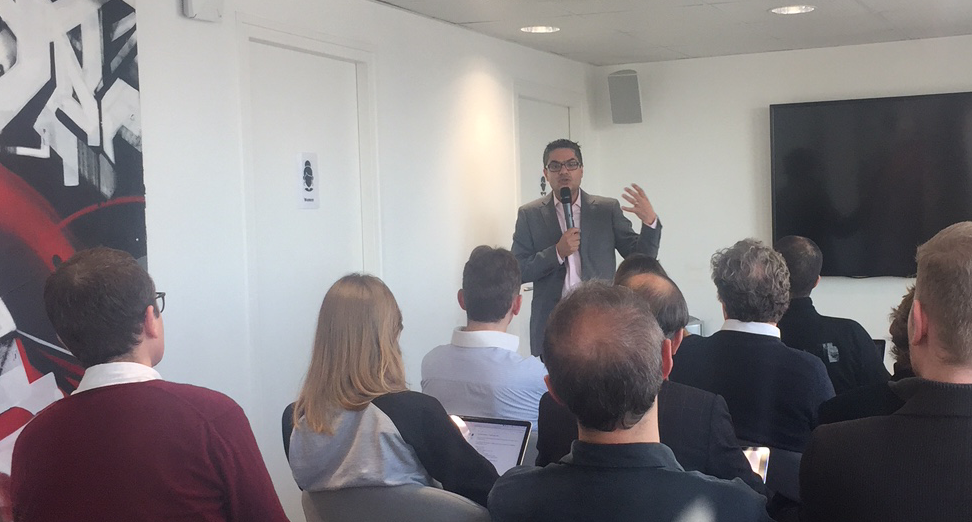 For our second Entrepreneurs'Talk on how to successfully conquer the US market, Réza Malekzadeh, General partner at Partech Ventures based in San Francisco, focused on fundraising with US Venture Capitalists (VCs).

Réza Malekzadeh opened his conference by explaining that the father of Venture capital was Georges Doriot, a French Harvard professor. One of his first successful investments was in DEC, a company that wanted to make computers smaller and easier to use. Later on, his associates moved to the West Coast and created Greylock Partners, one of today’s most reputable funds. Today, on the West Coast, Stanford University is one of the main reasons why the Silicon Valley has become an innovation hub. Stanford developed incentives to encourage university graduates to create a company in the Silicon Valley rather than moving to the East Coast. They built a small local ecosystem made up of academic researchers, businesses, lawyers…This networking model is one of the foundations of how business works in the US. Americans like this proximity. The constant interaction between the academic and the business worlds in the Silicon Valley facilitated the development of numerous projects and so in order to benefit from campus proximity, many US VCs moved to the region.

Human relationships are an important factor in the US. VCs won’t invest in a company unless they know the founders. They need to develop mutual trust. Who you know is key and so approaching a VC via a bank is not a good tactic. “As a general partner at Partech Ventures, I want to have information about the entrepreneurs. If you have the ambition to raise funds in the US, you need to move there and meet as many people as possible. Americans don’t like investing in a distant company; it’s even a struggle to get them to invest outside the state of California!”

Another key US market characteristic is that Americans talk a lot more about their work than the French do and they aren’t afraid of somebody stealing their idea. They don’t sign confidentiality pacts or Non-Disclosure-Agreements (NDA). For them, execution is more important than the idea itself. Google for example was not the first company to launch a Search engine but the 11th. The notion of networking is key, and you shouldn’t hesitate to ask for more contacts.
Another difference is that when you meet a US investor, it’s a two-way relationship: you can feel free to ask them as many questions as they ask you.

Questions & Answers
Q / For your US fund-raising strategy to be successful, is it recommended to be a US graduate?
It’s true that it is better if you have a local diploma as a “local brand” and then you can start making contacts. US Universities connect their students very well with the funds and organize events on their campus. However, keep in mind that the quality of French education is highly valued here, particularly in scientific fields. Most of the mathematicians at Google and Facebook have a French education.

Q/ What is the best timing to set up your business in the US?
One of the best criteria is to know if your generic technology can address the totality of the US IT market, which is 10 times larger than the European market (45 % of the world-wide IT budget is in the US). So, with one country, one language, one currency you can access half of the global IT budget…
The second criteria is timing: you need to be ready. The move is a costly venture and you need to have the right mindset and to be physically present to build local relationships. You can’t come and go every three months. A successful move is expensive, and will take time, from one to two years. A good option is to raise funds in France for the budget to move to the US.

Q/ Are US early stage funds much higher than in Europe?
Yes, but running costs are also much higher. Raising USD 1 million in France is equivalent to USD 3 million in the US. In the US, you have to pay an engineer with no experience USD 100,000 a year, a press agency costs USD 15,000 a month and monthly rent for a room in a shared house costs USD 1,500. Taxes are much higher too. Another reason why more cash is raised in the US is that Americans are very confident and very good at projecting a stronger image than actual reality.

Q / I have developed a consumer app with French traction and want to develop it in the US: is it better to start building traction in the US before approaching US VCs or to approach them directly?
It depends if your app is applicable to the US or not. You should ask yourself the following questions:
- Is there a market for your app in the US? Very few companies manage to create their own market.
- Is there a technological asset or not?
- Do you need to be in the US to build traction or can you do it without a physical presence?
There are no specific rules and remember that Americans will look at the team first.

Q/ What about going through an adviser?
An adviser will never convince a US VC to invest in your company. The only person who can convince a US VC is the entrepreneur himself. At an early stage, American investors invest in an entrepreneur. In the same way, a country manager won’t be sufficient either. If the founder himself is not based in the US, then a co-founder with the same level of commitment to the business should be based there. A VC invests in a person.

Q/ What about going through local incubators to accelerate networking?
Y Combinator is well recognized by the US VCs, so yes it could be a good option, but you need to stay in the US.

Q / What do you think about structures such as the French accelerator?
It depends on the structure and you need to be able to look at their track record. Around USD 100 million has been raised by companies that integrated the Impact Program developed by Business France launched 7 years ago. Hence, US VCs trust this program as it has proved that their selection of companies makes sense.

Q / Won’t this increase engineering costs and push US investors to look outside the US?
It is more and more accepted to have developers based somewhere else, especially as the GAFA are paying huge financial packages to attract engineers and therefore startups cannot compete. So, you see more and more developers outside of the Silicon Valley; now, there is a boom in Eastern Europe

Q / Is it an issue to talk to investors with competing Limited Partners (LP)?
Once again, in the US mindset, your personal brand is your most valuable asset. LPs do not have access to all of the funds’ information. It is almost the opposite as at Partech, we have around 30 corporate LPs such as Renault or Carrefour and our startups ask us to meet them. It is one of our value adds.

Q/ Can you advise us on deal information sources in the Silicon Valley?
I personally look at Crunchbase for the deals, as well as the National Venture Capital Association newsletters. Fortune also publishes a valuable daily newsletter. These are free sources.

Q / Is it a myth to say that it is easy to go to the US?
It’s a myth to say that you absolutely need to go to the US. It is very rare to find companies with the right idea and the right reasons. People often talk about the Israeli ecosystem, but the difference is that they don’t have the choice: there is no market in Israel. Startups need to think about going to the US from scratch.

Q / What is the cost of a salesperson in the US?
A junior inside-sales costs between USD 60/80,000; an enterprise software salesperson with 5 to 10 years’ experience costs between USD 200/300,000. They are all paid 50% base / 50% commission and they get fired if they don’t achieve their targets two quarters running. Quite often in the US, a salesperson is one of the highest-paid people in the company.
In general, you should plan for a USD 2 million budget for a 2-3 year stay in the US.

Q/ How do you recruit?
This depends on the seniority of the candidates: if they are very senior, we use a recruiter or our local network. Once again, it is expensive to go the US but there are many advantages:
- This is a huge market
- Americans trust startups and always pay on time
- Opportunities are huge if you are in the right field

Q / Do you believe that large US companies are reluctant to buy a product or a technology made outside of the US?
No, it doesn’t matter but, once again, you have to have local presence. Legislation can be a limit in some cases; for example, for encryption security technologies because the US government imposes many restrictions.

Q/ When you pitch your project to a US VC, what are their expectations?
A formal pitch lasts 45 minutes and you should focus on:
- who you are
- what is the market
- why you are the right person
Are you the right team to address the right issue at the right moment: this is the equation. Americans don’t think about the product but more in terms of the solution to a problem.

Q / At which stage should we think about monetization?
The largest US funds have a strategy called “swinging for the fences”: they do 100 investments and if 99 % dies it doesn’t matter. The French investment culture is safer: French funds do not accept too many failures. In the US mindset, failure doesn’t matter. They are not looking for proof that it works but they want to be able to imagine that it can work. This is the huge cultural difference between European and US VCs: Europeans want more proof and Americans accept failure more easily and would ask you “what did you learn from your failure”. This mindset is gradually changing in France.

Q / If you are in the hardware business, is it easy to raise funds in the US?
Similar to France, there is generally less appetite for hardware in the US.

- The wrap-up of the 1st Entrepreneurs'Talk of the cycle dedicated to the US market: The Nuts and Bolts of Opening an office in the USA.

You wish you were here? Join the Entrepreneurs' Talk MeetUp group and don't miss any of our next events!