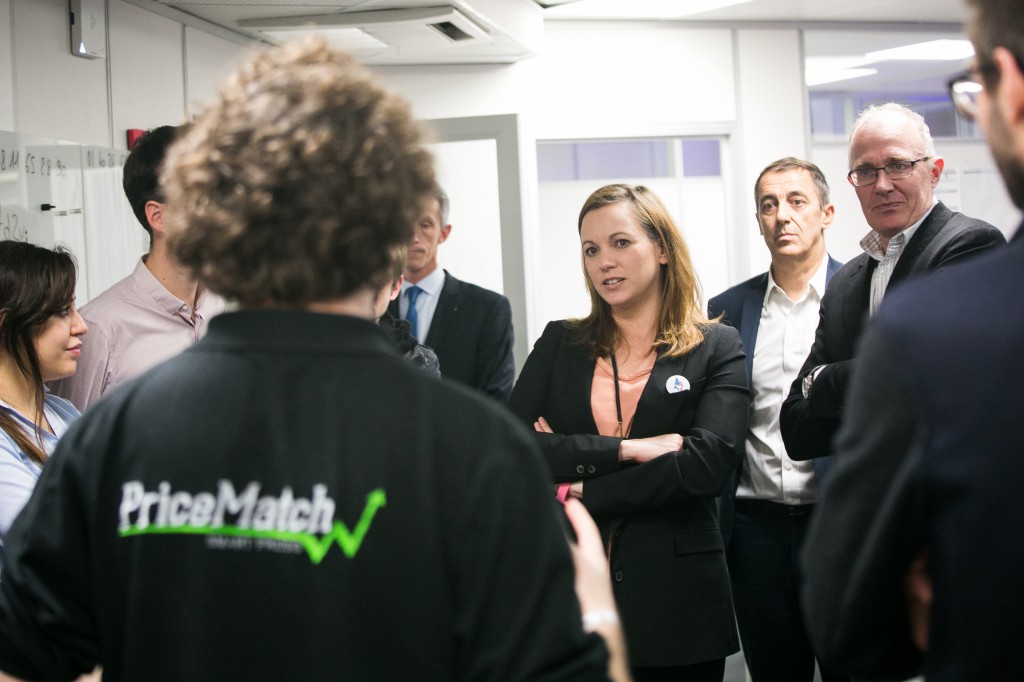 The inauguration of the Partech Shaker was first and foremost a PR opportunity for its resident startups. Although French Economy Minister Emmanuel Macron took a few questions after his speech, he was clearly impatient to meet the young entrepreneurs and their teams, whom he had earlier set the challenge of becoming the CAC 40 of 2034. Then it was the turn of late arrival Axelle Lemaire, Minister for Digital Affairs, to meet some of them.

With Paris Deputy Mayor Jean-Louis Missika at his side, Emmanuel Macron worked his way through the Partech Shaker building floor by floor, stopping at every desk to shake hands. The minister met with all types of enterprise; some, like Sigfox, needed no introduction and simply took him through their plans for the next stage of development. New startups took the opportunity to make a pitch and test their products on him – that’s how the minister ended up with a funky Phonotonic, a new product that transforms movements into music. Next up was Tatiana Jama’s demonstration of search app Selectionnist, which enables consumers to find and purchase products they spotted in a magazine, followed by a presentation of Kartable by founders Sarah Besnaïnou and Julien Cohen-Solal.

Both Macron and Lemaire were clear that it’s vital for startups to gear themselves towards an international market, and they were particularly interested in hearing from the young founders of PriceMatch and Lima – the latter is to represent French Tech at the next CES trade show in Las Vegas. Mayor Missika was delighted to see Kantox there, and his speech highlighted how Partech Shaker can draw foreign talent to Paris and help the city meet its target of 30% non-French startups in its business incubators.

The corridors were buzzing with entrepreneurs impatiently waiting their turn to meet the prestigious visitors, or congratulating themselves on the opportunity they’d had to discuss their business, ideas and general thoughts on French Tech with some of the most important political decision-makers in the sector. These spontaneous meetings were very much in the spirit of ‘Shakage’, which the Minister for Digital Affairs praised in her ensuing speech.