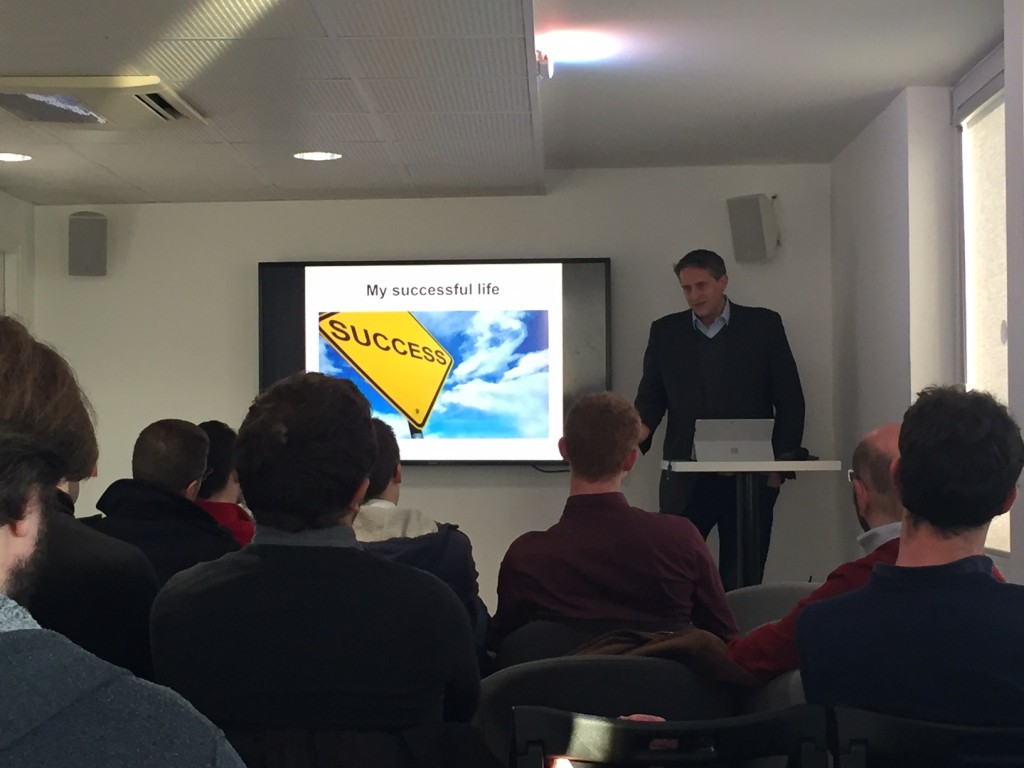 Nicolas Gaume's story is emblematic of the past 20 years of the internet. Now Head of Microsoft France DX Division (Developers & partners’ relationship), he was once one of the major pioneers of the video game industry – particularly in France – before being hit by the collapse of the dot-com bubble in the early 2000s. What followed was a long series of difficulties, which he is successfully moving past today. Quoting Churchill, he says: "Success consists of going from failure to failure without loss of enthusiasm." Nicolas feels that he has come full circle. By becoming Head of Microsoft France DX Division, he has returned to his roots as an engineer and startup founder, working in a company of engineers that is up against the likes of Google and Amazon.

The major takeaway from his experience can be summed up in a few phrases. Doing anything at all means facing failure. Entrepreneurs spend some of their time talking about what they do, to help those around them to understand. When we fail, it can be hard to hold on to a consistent message. One of the major challenges facing entrepreneurs is building and aligning this message, whether it involves success or failure.

Nicolas calls a first part of his youth his "successful life". He learned to code on an Apple 2 in the late 1970s around the age of 8. When he was growing up in Arcachon, in southwest France, the disruption created by new players in technology quickly made an impression on him. Apple's motto is "changing the world, one person at a time". The challenge was rethinking the mini-computing of major empires like IBM, large companies and centralized administrations. When he was 12, he designed and sold his first video game. He was online several hours a day, as well as on BBSes.

Atreid Concept: one of the first video game startups

It was a logical next step for him to found Atreid Concept, a video game company, whose vision was addressing the increasing need for streamlining the production chain and developing for the major platforms of Microsoft and Apple. Following a meeting at Apple's European headquarters in Paris, he received a loan of Macintosh equipment, set up his company in Arcachon and began IT studies at the local technical institute. In the 90s, he began adapting games for Ubisoft and Electronic Arts alongside major names at the time, such as Michel Ancel (Rayman) and Peter Molyneux. Apple invested the equivalent of a million euros in the company. He began developing games for Windows 3.1 and working in partnership with Microsoft. Bill Gates used one of Atreid Concept's games to promote Windows 95. In 1994-95, the company had about 50 employees. One of its successes was an adaptation of the game PacMan, published by Bandai Namco then Nintendo for Game Boy.

In 1994-95, games were beginning to become costly to produce, with production running around 1 to 1.5 million euros. Yet Atreid Concept succeeded, with 15% net profit and sales in the US and Japan. The company felt the need for more investment. Due to the lack of venture capital at the time, Nicolas turned towards industrial players. As Apple was at a complicated point and Microsoft did not have a big investment culture, he sold Atreid Concept to the English group Pearson (Les Echos, Financial Times), who also owned the game studio Mindscape. Nicolas retained overall management of his company, but received 4.5 million euros after taxes. Around age 23-24, he got involved in the next generation of 3D games: PlayStation and Xbox.

While managing Kalisto, in 1995 he participated in the creation of Wcube, one of the first French web agencies, and then in 2000 was involved in creating WineAlley.com, a company for promoting and selling wine online.

In 1994, with a strong interest in China and following a trip there during which he noticed the Chinese market's increasing need for training and education, he launched NGM Productions, a children's book publishing company in China. NGM published the Père Castor (Flammarion) and Incollables (Play Bac) series.

In the late 90s, his workday began very early so that he could work on developing NGM Productions with the teams in Shanghai, then manage Kalisto (about 200 people), and then work on the Wcube and WineAlley entities. He travelled for work every two weeks, generally to China or San Francisco.

In 1996, French President Jacques Chirac brought Nicolas with him on a trip to Japan.

In 1996, Nicolas bought Pearson's multimedia activities and founded Kalisto. In the years that followed, he sold Wcube (which became an agency of Publicis), and then sold WineAlley to Crédit Agricole. In 1999, he also sold the publishing activities in China, after having sold a million books in 5 years.

However, venture capital remained rare. In 1999, Kalisto was listed on Euro.NM, which at the time was the European equivalent of Nasdaq. Listing as part of the dot-coms was a major success. Nicolas was virtually a billionaire in euros in the early 2000s. Kalisto had 350 employees, including 70 in Austin, Texas.

The story could have stopped there, but it didn't – and in the words of Orson Welles, "If you want a happy ending, that depends, of course, on where you stop your story".

In the early 2000s, disenchantment with dot-coms caused the stock market to collapse. At the start of 2002, URSSAF (the French Organizations for the Collection of Social Security and Family Benefit Contributions) put Kalisto in compulsory liquidation with 42 million euros of debts. Nicolas was the guarantor. At this time, he was experiencing both personal misfortune and very harsh professional attacks. He was made out to be a scammer that emptied people's savings, and received anonymous threatening letters. His name was slowly cleared, but the liquidation of Kalisto wasn't final until August 2016, ten years after the initial decisions.

Ubisoft and the Lagardère group welcomed him to management positions. He then created Mimesis Republic, a multi-player social network. He also became a mentor in a Berlin-based startup accelerator.

In 2012, he decided to change paths and join Microsoft, which he saw as a company of engineers that was investing in technology and the cloud.

Nicolas draws his inspiration from philosopher Paul Ricœur, who said that "we are entangled in our very own stories". His story – his social identity – was built from a young age around coding, video games and the spirit of disruptive innovation through technology.

Being an entrepreneur involves having a vision of a market, writing a new chapter, and putting it all together. But, at times, this narrative is inevitably faced with a shock from reality, as the entrepreneur comes across others – whether shareholders or even family members – that don't have the same vision of the market or of the entrepreneur.

This shock can create a profound sort of schizophrenia, and the entrepreneur will need to harmonize these stories. An entrepreneur should always be aligning perception and reality, keeping his story coherent, and making it evolve.

He can lean on a longtime partner, a board, or on a close team.

This is all the more key in startups, where the need is greater due to the rapid growth of teams. While at 5 there may be no need for discussion, when the company exceeds twenty it becomes crucial to align the message in order to then share it. Beyond this point, Dunbar's number (the limit to the number of people with whom one can maintain stable social relationships) can quickly sneak up. It is ultimately the story that creates unity.


Join the Entrepreneurs' Talk MeetUp group  and don't miss any of our next events!