Tech versus Management: a CTO’s role, according to Epsor, Bearer and Ubble 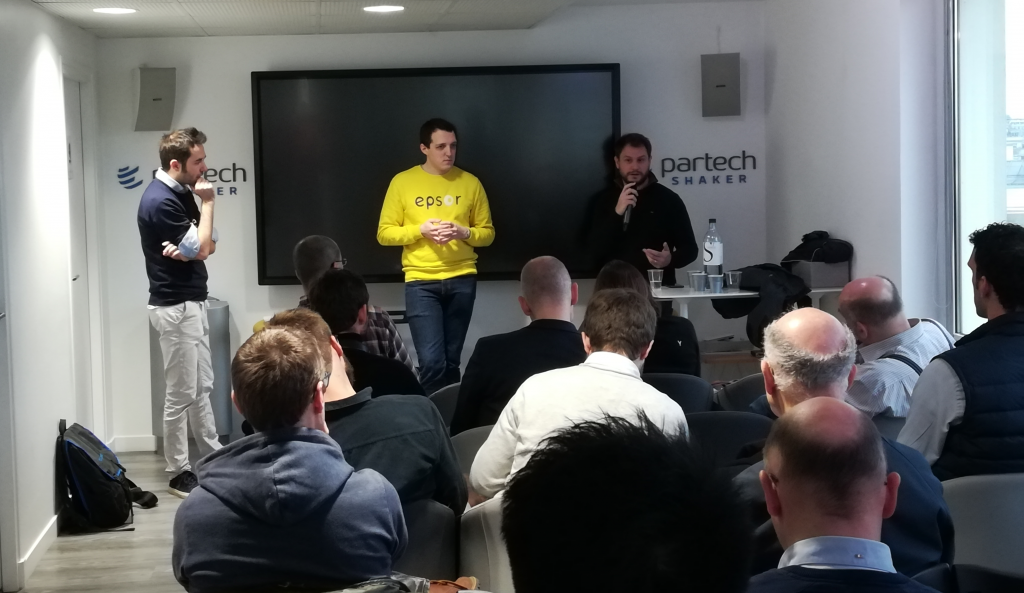 The job of CTO (Chief Technical Officer) entails much more than being a technical director: CTOs are also responsible for ensuring their team develops and evolves. In addition to being technology enthusiasts, CTOs need soft skills and a strategic vision. To explain a CTO’s role in startups, the Partech Shaker brought together a panel of three CTOs: Julien Murgey, Epsor Co-founder and CTO, Cédric Fabianski, Bearer Co-founder and CTO, and Nicolas Debernardi, Ubble Co-founder and CTO.

HOW IT ALL STARTED

-> Bearer, an API integration expert for developers, was created in January 2018. After having worked in Edinburgh, engineer Cédric Fabianski, created Bearer with his associate Guillaume Montard in November 2017. They raised funds in April 2018 and recruited two people. Today, Bearer is a remote-first company which employs 12 engineers. “At the beginning, my associate and I both coded”, recalls Cédric Fabianski. “When Bearer expanded, our role evolved from coding to managing our team so that our employees code efficiently, which required a more structured and processed organization. My aim today is not to code anymore but to understand the architecture and to evaluate feature feasibility. I make sure the technical team is efficient.”

-> Epsor is a fintech company specializing in employee savings and retirement. It began with four employees and currently has a workforce of 40. Julien Murgey, graduate engineer, worked for four months in a computer services company before creating Epsor in 2017. “We started with four people and a trainee developer”, says Julien Murgey. “The CTO role evolves with the size of the team. With a two-person company, you can code but with four employees, you code less and spend more time reviewing the other developers’ work. So, you don’t code anymore. Today, there are 10 developers at Epsor and sometimes, it is frustrating not to be able to code anymore, but that’s the way it is.”

-> Ubble specializes in digital identity verification and was founded mid-2018. Ubble employs around 30 people, including 50% of tech staff. Nicolas Debernardi did not set out to become a CTO; he is an engineer, who was previously a consultant and then built up the data-science team at Criteo. “From the early days with three people, we decided to act fast in order to quickly develop our product”, recalls Nicolas Debernardi. “That’s why we raised pre-seed on the day of our creation, enabling us to create a team of five developers from day one. As a result, my role as a CTO was to manage and structure the process in order to ensure that the developers were efficient and to make sure that they could rely on the right work method. From the start, I focused on adapting our development work to the product vision and on preparing the future. Today, I work less closely with the technical leader and delegate more and more. This is a change that you need to accept as a CTO.”

-> Nicolas from Ubble faces the two main challenges of security and regulation as Ubble deals with confidential personal data such as its clients’ faces and ID. Ubble therefore needs to provide methods and tools to ensure that its products are highly secure. Cost-effectiveness is the third challenge in creating a profitable product.

-> At Epsor, the main issue is to be able to follow the product’s rhythm. The employee savings market is evolving and growing rapidly with the PACTE law: the French government wants the employee savings market to grow from €200bn to €300 bn. In this context, Epsor needs to enrich its products with additional features, which means that Julien must implement the right processes in order to continue developing the products as quickly as possible.

-> Bearer faces the same challenge of being able to deal with startup development: the CTO is a developer, technical lead, engineering manager and CTO all at the same time. “As a CTO and co-founder, you need to be where you can have the strongest impact”, explains Cédric Fabianski. “Our main challenge is to remain fully remote, which raises additional challenges in terms of recruitment.”

-> “Bearer is remote-first and I believe that this is a strength when it comes to recruitment”, says Cédric Fabianski. “When I first had to recruit outside networking, I was faced with new challenges. We published a job offer for a junior/mid-level frontend engineer and we received 900 applications. We knew we couldn’t review every application, so we set up a process, using Typeform, where we asked some of the questions we usually asked during an interview. We also sent an automatic reply to thank candidates for applying. An additional challenge is the fact that we do not want to a be in a physical office. Now, we have two teams in San Francisco and Paris; two units with two senior technical leaders. We are focusing on how to scale this up to 25 tomorrow. It is key to identify the skills that you need. We are evolving at fast rate, getting ready for a Series A round, so we need to be ready when we get the funds. I learn a lot from others.”

-> For Epsor, the main recruitment challenge is to ensure a balance between the different divisions: technical, product, sales, customer service, and marketing and communications. With the current developer talent war, Epsor focuses on raising technical profiles and always has available positions. This is not the case for the other departments, such as sales. Maintaining a balance between all the departments is a genuine challenge, and Epsor cannot sell features that it won’t be able to develop because of a lack of capacity.

-> From the start, Ubble chose highly experienced people and developed future technical leaders and team managers with a vision of scaling later. Ubble did not want an army of trainees. Sourcing remains a key issue: Ubble relies on a global employee network for its initial source of candidates, as well as on headhunters with whom it has built a close and trusting relationship.

-> Ubble’s key criteria in recruiting developers is their enthusiasm for the project. “I never had to recruit senior people before”, said Nicolas Debernardi. “I contacted experienced people in other companies and set up an organized approach. For us, recruitment is not only the CTO’s responsibility: it is everyone’s, from the CTO to the most junior profiles, so that everyone becomes a company ambassador. We standardized our job interview process: after a first filter we meet candidates for a “seduction interview” followed by a second four-hour test session, including a feature to produce at home. The idea is to show them what their job would be like. Most questions are about company culture and how to solve problems. We want applicants to meet as many people as possible within Ubble. Seniors are a strong factor of attractiveness.”

-> Bearer makes sure future employees are up-to-date about the company’s culture as this is key to attracting candidates. Bearer ensures that it is fully understood by all, especially the initial employees who are company ambassadors. “As a remote company, we trust people and my role is not to micro-manage people but to follow everyone’s career development and make sure everyone adheres to the same goals”, recalls Cédric Fabianski. “Developers are attracted by the project, the human adventure and the drive to learn from senior developers. Seniors are highly valuable in attracting other people. Companies tend to have many juniors at the bottom of the pyramid. Even if it costs less, onboarding and training them is time consuming. For us the ideal model is a diamond model with many mid-seniors and very few juniors.”

-> Culture is also key to recruitment at Epsor. “We once recruited a 40-year-old senior developer with a family and kids”, explains Julien Murgey. “The average age was 25 at Epsor so there was a gap in interests and the senior soon felt excluded and wasn’t comfortable with the company culture. He finally left the company. Our values are in our products; we are a finance company but still have a soul and more and more clients want to invest in socially responsible funds. When we first started recruiting, we made the mistake of recruiting juniors. With four people in the company, co-founders can manage juniors, but when you get to 40 employees, it becomes impossible. Juniors who joined the company at the early stage had technical, but not management skills. We had to recruit people to manage them and our juniors did not appreciate having less responsibility. Seniors cost more but are a long-term investment.”

WHAT IS A “SENIOR”
For Ubble, “senior” refers more to a state of mind and the way earlier experiences were managed rather than the number of years of experience. At Epsor, seniors have technical, managerial and human skills. For Bearer, seniors must have a clear understanding of the job and of the company’s vision; it has nothing to do with age. A technical leader is a senior position with an organisational and managerial role, while an engineering manager focuses more on the human side.

HOW TO BE A CTO AND CO-FOUNDER
As a CTO, Nicolas Debernardi from Ubble can assess if Ubble is able to make a product within a certain time. Nicolas confers with his associate who knows if there is a market for a product. He also interacts with the CEO about the quarterly goals.
At Epsor, the CEO is the number one sales person and the face of Epsor. The COO operates the company on a daily basis and is the number two sales person. Epsor’s CTO focuses on the product to assess its market relevancy. Bearer’s co-founders are the CTO and the CEO.

HOW TO RETAIN TALENT
Recruiting developer talents requires a lot of energy, and the question remains as to how to retain them?
This is not a priority for Epsor, Ubble and Bearer, as none of their developer talents have left so far. Ubble hasn’t set a specific retaining approach in place but has always kept its promises. Employee retention is higher when a company is growing. Ubble makes sure that developers meet each other at least once every two weeks to review their issues and organizes a “free-time day” when everyone is free to do anything they want. Generally, this is very beneficial and results in useful initiatives. Bearer makes sure it listens to its employees during one-to-one meetings, and overviews what has been done. Bearer is very transparent and keeps everyone informed of the company’s evolution. Epsor believes that BSPCE is a good financial incentive for retaining employees and relies on the company’s culture of employee motivation.

Don't miss any of our events! Join our Meetup group :)