The F.I.R.E. movement talk at the Partech Shaker! 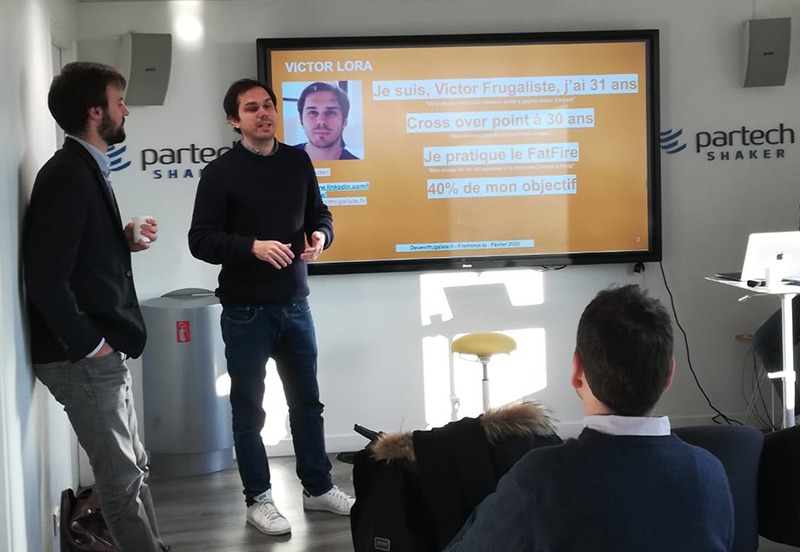 The F.I.R.E. movement is increasingly gaining traction around the world. The appeal of retiring at 40 by become financially stable at a much younger age is growing in popularity, not just in the United States where the movement originated, but also around the world, including in France. Although perhaps the movement has adapted depending on the country in which it is practiced, the main principals remain the same: be frugal and careful with your money and you will be able to find yourself in a far better situation much earlier than your peers.


Victor Lora and Arnaud Romanet-Perroux were invited to the Partech Shaker to explore this topic and teach those attending about their experience with the FIRE movement.


Victor Lora oversees strategic projects at Bankin’ and began the talk with a presentation of himself. He explained that he practices ‘fat F.I.R.E.’, a subcategory of frugalism which aims to make efforts while maintaining a certain standard of living. For Victor, while the importance of work in undeniable, as it allows for a certain level of fulfilment, it is vital not to live in fear that your startup will run out of cash or income. F.I.R.E. aims to encourage people to live a careful lifestyle but does not go as far to evoke fear in its followers. Living frugally does not imply living in fear of money or spending. On the contrary, F.I.R.E. is a movement of intelligent wealth management, while with fat F.I.R.E you maintain a high standard of living: for example you live In Paris where the housing costs are higher than in other regions in France.


Moving on from the explanation of the overall concept of F.I.R.E., Victor began to delve into the theory of putting F.I.R.E. into practice in your everyday life. He began by explaining how you as an individual can achieve financial independence: for this, investment is key. Investing in startups and property (but doing so wisely) can allow you to be making enough money to cover your everyday expenses, as Lora achieved by the age of 30, without even considering your salary. However, there are conditions to these investments. Victor points out that to truly respect the F.I.R.E. method, your property investment should attract at least €300 per month. At the same time, you should be aware of the place in which you have property. Buying an apartment to rent is important but knowing where to buy this property is vital. For example, if prices begin to increase in the cities, invest in properties in the suburbs.


Victor Lora then began to explore misconceptions about the F.I.R.E. movement, starting with the incorrect comparison between the US F.I.R.E. movement and that of France. The same F.I.R.E. movement that is practiced in the US cannot be compared to that in France, due to the different amount that Americans are taxed. Whereas those in the US invest in the stock market to respect the movement, the French are advised to take out loans for real estate, as this is far easier to access.


The F.I.R.E. movement, we are reminded, is not an immediate process. By becoming frugal for a day, you will not immediately become financially stable for the rest of your life. Rather it is a process that takes time and involves constant consideration of money and spending on an everyday basis. Investing in property, for example, takes time. Building a reputation that allows you to become a more trusted property renter also does not happen overnight, and so this must be considered when embarking on your frugal journey. Your everyday life must also be altered. Victor Lora divulged that he goes out far less often than the normal person, he only goes on holiday once a year and he even misses lunch in order to save as much as he can.


The conversation soon progressed to talking about how the F.I.R.E. movement affects wider topics, such as the environment and an augmented reliance on consumerism. By cutting out the unnecessary holidays and ‘treats’ in your life, you become far more aware of your impact on the environment. As an example, Victor said that for a lot of people, skiing at winter has become a staple in their lifestyle. However, skiing and all the things that come along with it, such as travel and even buying the necessary clothes, are affecting the environment at a significant rate. In terms of consumerism, Victor explained how society has moved from buying out of necessity to buying out of pure want, a fact that has created a population that has no regard for the implications of their spending. However, adopting FIRE movement brings back the consciousness behind purchases which can only be positive for the environment.


An interesting quote that Victor recalled during the talk was one from Michele Bouin, who crudely stated ‘Life is a piece of shit and you have to eat a bite every day’. To Lora, this quote had a deeper meaning than appears on the surface. It signifies that life is not about endurance of the difficult times but rather perseverance, and the knowledge that one day life will inevitably get better, a nice summary of the entire FIRE movement that sees several years of hardship as a period of perseverance until financial independence is achieved.


Arnaud reiterated many of the points made by Victor, explaining that when you do find a startup in which you can invest, you must be smart about it. You must know how to spend the necessary money in the investment while saving as much as possible. The founder of Upstone then went on to explain the activity of his company. It is a real estate crowdfunding platform that democratizes and simplifies investment. It is people like Arnaud who are making it easier for society to move towards a more frugal lifestyle. The company works on the basis that nowadays, people are far more likely to invest in shorter term deals, as there is a lack of a consideration for the future. It is this contradiction to the F.I.R.E. movement that Arnaud is solving through Upstone. By investing in property, even if it is shorter term, young people are developing the necessary skills to become financially independent by 40, even if they do not advertently know it.


The talk concluded with an exciting discussion between the audience of the speakers, involving skeptics of the movement and those committed to it, discussing what the best course of action is to become financial independent to retire early.


Learn more about the F.I.R.E. movement in France with Victor’s blog.


Don’t miss any of our next talks, join our Meetup group!