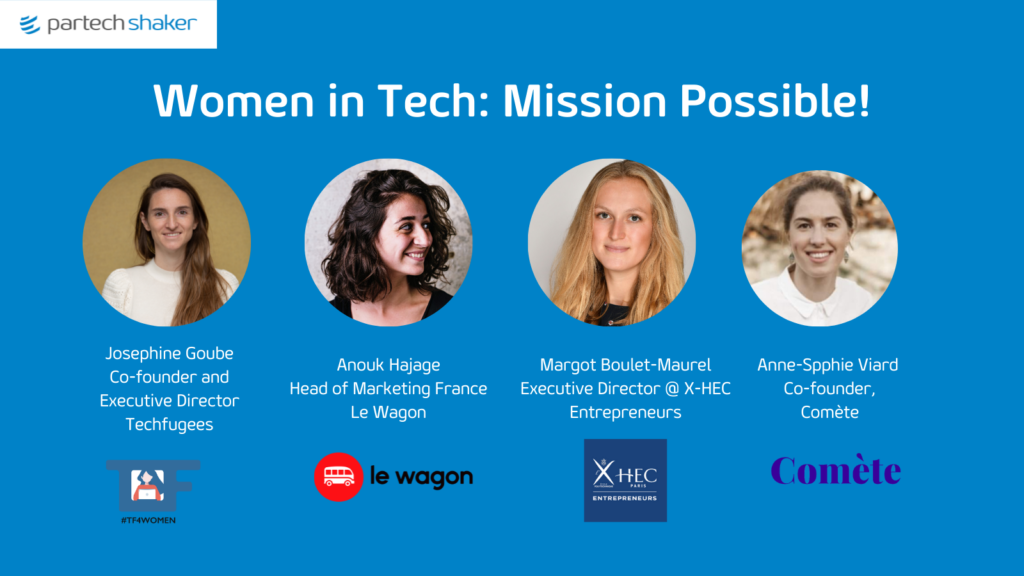 On Thursday the 30th of September 2021, we were delighted to host a discussion on the enduring issue of women in tech.


While women are a growing part of the tech landscape, in the grand scheme of things, the sector still hugely lags behind in terms of complete gender equality. Indeed, according to a study conducted by the WomenTech Network, in 2020, only 17% of IT specialists were women, just 22% of participants in tech ecosystem events in the EU were women, and a whopping 93% of the total capital invested in tech companies went to all-male founding teams.


Knowing that we must do better, we invited 4 experts on the subject to tell us how their initiatives are working to break this archaic trend.


Joséphine Goube is the Executive Director of Techfugees, a charity founded in 2018 and specifically targeted at refugees based in Europe with the main goal of integrating women into tech and digital careers. The 4th French-based 6-month program that kicked-off in mid-September is currently providing mentoring and training, as well as networking events, immersion in the French tech ecosystem and job opportunities to 20 female refugees.


Anouk Hajage joined the team at Le Wagon Paris in 2018, and now heads up their marketing strategy in France their 8 French campuses. Diversity and inclusivity are at the heart of the development and communication strategies of Le Wagon, where they offer coding and data workshops aimed specifically at women, fully funded training programs and host female role models (entrepreneurs, data scientists, developers) through their events and partnerships (Paris Data Ladies, Sista, Partech Shaker).


Margot Boulet-Maurel is Executive Director of X-HEC Entrepreneurs, and founder of BoostHer. Margot founded the BoostHer program: a bootcamp aimed at young women and focused on ambition, self-confidence, and entrepreneurship. After holding the first edition of this program in May 2021, it continues to see great success.


Anne-Sophie Viard is Co-Founder of Comète. In recent years, she has worked her way up the ranks of Denmark-based pharmaceutical company Novo Nordisk, from Access and Public Affairs Manager, to Associate Director of Strategy and Operations, to her current position of Project Manager, Obesity and Prevention. In 2019, realizing that the world of business seemed so frequently inaccessible, she co-founded Comète, the business club for women that aims to support and propel the next generation of women leaders.


General Manager of the Partech Shaker, Sarah Huet, hosted the Shake and Learn and opened by proclaiming the talk’s objectives: to speak in the most open way possible about the initiatives advancing the presence of women in tech.


Is Tech a Complete Boys’ Club?


Anne-Sophie began by astutely pointing out that, regarding attitudes towards female inclusion in male spaces, there is a generational gap. Women who started their careers in the 70s and 80s, having lived through the toughest times of fighting for feminism, may be hesitant to join business groups such as Comète for fear of their being male dominated. Yet travel forward a few years and today’s women understand the need to collaborate and stick together. There is no need to be super-human and do it all alone!


So, is it Really Women we Need to Target with Initiatives?


Host Sarah seconded this observation and noted that due to this cultural change over many years, women are already convinced that there should be a space for them in the tech world. We no longer need to convince them of this! Joséphine agreed and added what we do need to do is to make CVs and job adverts more inclusive, to level the playing field. For example, hosting table football matches, drinks and evening parties after work is all well and good, but greatly neglects the fact that pregnant and women with young children to care for could not participate


The Conversation Must be Uncomfortable for it to Work!


Josephine continued by saying that the discussion of including women in male-dominated workspaces must be uncomfortable for it to work. She told us that at one of her Girls in Tech events in London, an investor raised the question of “what to do with a pregnant founder wanting funding?”. Quickly, a female investor chimed in: “Did you know, I actually find more problems with high-flying men in their 20s who drink every night and don’t look after themselves, than pregnant women who have their lives meticulously planned out and are looking after their health”.


So, it’s a Question of Inclusion?


Yes – said Anouk, but it’s not just a question of inclusion of women, but of diversity in every sector and of self-confidence. Before any of the technical training begins, women must learn to say to themselves “I am legitimate. I belong here”. For this, Le Wagon launched their Women Coding and Data Days, workshops dedicated to women. At their regular workshops, she said, around 40 people attended. At the women-targeted ones, over 70 people signed up! The Wagon has now gone from only 18% female presence in their workshops, to over 37%.


Margot seconded this statement, saying the gap in inclusion is not only generational, but also it is a gap of self-confidence. BoostHer was created to talk about these uncomfortable topics such as imposter syndrome – all the things that stop girls and women going for the jobs they deserve. The initiative is currently looking to reduce this gap between male and female entrepreneurs and works tirelessly to create a strong safe space in which women can learn and share.