Wrap-Up: Business and Sustainable Development: What do we do now? 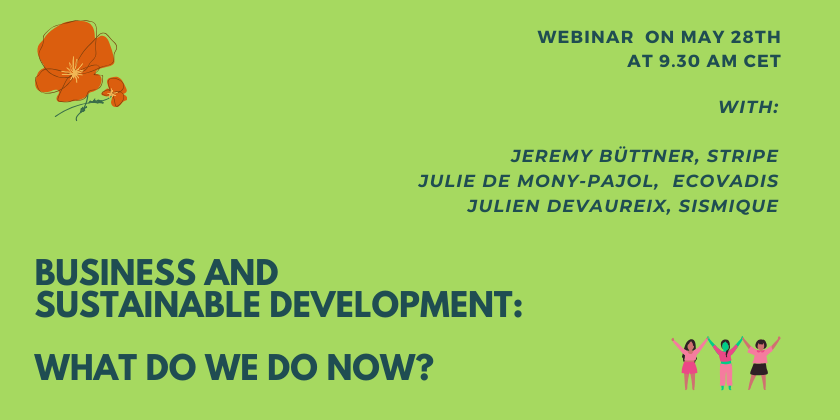 On the 28th May, the Partech Shaker hosted an online event titled ‘Business and Sustainable Development: What do we do now?’ This topic is now more important than ever, with the sustainability of a company being such a decider as to whether it will survive the current turbulent times that we are experiencing. The lively discussion was led by Julien Devaureix, host, and founder of ‘Sismique’, a podcast that discusses the challenges of a rapidly changing world so that we can better understand our ever-changing situation and adapt and prepare accordingly. Jeremy Buttner and Julie de Mony-Pajol also joined the discussion. Jeremy Buttner works in Partnerships and Negative Emission at Stripe, a technology company that builds economic infrastructure for the internet, while Julie is the Customer Success Manager at Ecovadis, a ratings platform that assesses corporate social responsibility and sustainable procurement.


The talk began with an introduction of our speakers and their respective companies. Julien explained how he is focused on exploring the possibilities of our future, and how we can prepare for a world that we are impacting so significantly. His podcasts involve interviews of historians, political scientists, economists and even astronauts, among many others. He explores topics including but in no way limited to ‘Green Washing’, geopolitics, biomimicry, and the impact of tech on shaping the future of the world. He is especially interested in the latter topic, and how the developing technological world is catalyzing our need to be prepared for any eventuality that the future may bring.


Julien then focused on how our very perception of the future has changed, and how a significant change in attitude towards discussing the long-term effects of our lives has also led to a revision in how we should discuss business itself. To demonstrate these changing attitudes, Julien discussed the difference in the predictions made by the World Economic Forum in their Global Risks Report from 2015 to 2020. It is obvious by examining the report that whereas once we did not consider the environment to be a significant threat to our world, we do not understand the risks posed by neglecting the environment. The risks that the report discuss should be considered risks for life in general, but more specifically also for business, who are under great threat from this changing world, lest they start to act and build an environmental and sustainability consciousness into their core values. Julien sees this progression of attitudes towards a preoccupation with the environment as largely positive, because bringing the conversation to the forefront of people’s minds represents a sort of social awakening.


Julien then began to discuss the idea of sustainability in business, and how this has been affected by the current COVID-19 situation. He explained that because of the coronavirus, we see sustainability emerging in all our conversations. It is not an easy topic to discuss and raises questions both on a micro and a macro level. What the situation has highlighted, is the unlikelihood of us ever achieving a sustainable economy. But how do we focus on enforcing a sustainable business model while also experiencing pressure to grow while making a profit? Well, Julien raises the point that being sustainable implies being able to last and carry on, and is synonymous to resilience and adaptability, and that is vital for a business to work towards. This idea of sustainability and preparing for the future is not new. It merely has become a key topic of conversation that is encouraging people to act.


Julien then asked the question as to whether environmental issues are taken seriously in the business world, and whether it is ingrained within the strategy of a company or whether it is solely discussed as a side topic. To answer the question Julie, after giving a brief explanation of what Ecovadis does, discussed the importance of making managers and leaders alike aware that CSR must be deeply embedded into the company values and strategy, and as such cannot be seen as just a side topic. In fact, on a positive note, Julie said how she believes that companies are understanding the importance of environmental and sustainability now more than ever. As a proof of this, Julie explained that she has seen a massive growth in her company, with the Ecovadis network growing considerably. The topic has transcended social conversation, and is now discussed on a business level, demonstrating the movement of society to a more sustainable future.


The discussion then moved to discussing Stripe and the initiatives it is committed to that further their goal of being a more sustainable company and motivating others to do the same. Jeremy discussed how, in 2017, Stripe announced its carbon neutrality commitment and, in 2019, its Negative Emissions Commitment, pledging at least $1M per year to pay, at any price, for the direct removal of carbon dioxide from the atmosphere and its sequestration in secure long-term storage. For Jeremy and Stripe alike, doing their part to reverse climate change is vital, and is a topic that should not be taken lightly. Within Stripe the question emerged: how can we build and develop products to earn additional funds to support their carbon neutrality mission?


Julien then directed a question to Julie: what are the key points that any organization who is serious about its environmental impact should consider? Julie answered by sharing a table that clearly laid out the 4 sub-headings of sustainability: environment, labor and human rights, ethics, and sustainable procurement. Discussing these topics and the implications they could have if not considered correctly is important for any company wanting to create a more sustainable future. In evaluating whether your business follows a sustainable model using these sub-headings, one must first look towards their supply chains as, as Julie points out, it is in large part the responsibility of the company to assess the risk in their supply chain. In this way, sustainability should be treated with the same significance as growth and profit. Being that there are many aspects to consider when improving the sustainability of your business, Julie highlighted that it is important to prioritize in line with your company values and objectives, in order to make your company sustainable in the best way for it.


Jeremy then discussed Stripe’s sustainability plan in more depth. Achieving carbon neutrality in 2017 was just the first step for Stripe, as they soon began to focus on the 6 gigatons of carbon dioxide that had to be removed from the atmosphere to make the earth healthier. The technology companies who want to achieve this today, find themselves lacking funding, and there is little demand for their product. Therefore, Stripe pledged an annual purchase of $1 million to support these companies and in doing so, become more sustainable themselves. With the $1 million set aside for these purchases, the team at Stripe then had to decide on the specifics: what was the criteria they would look at when selecting in a company? How were they to decide which companies would make the biggest impact? They subsequently went to academics and scientists who they worked with to define their criteria and more deeply understand exactly the type of positive impact the company wanted to make. After thorough discussions and research, Stripe decided on a set of companies, which they publicly disclosed recently to have total transparency into their dealings. Jeremy highlighted how both Stripe users and non-Stripe users alike were extremely excited about the project.


Julien then directed the conversation to the challenges that Stripe was facing in implementing such a huge initiative. Jeremy discussed how the negative emission space is very new, which led to a steep learning curve for the team. As the team was not comprised of scientists, they wanted to ensure that the purchases they were making were based on research that was scientifically rigorous, hence the need to partner with various experts in this field.


Julie also explained the challenges faced by a company wanting to do more in terms of sustainability. The first thing that she mentioned was the necessity of having a clear vision. You must ask yourself: what am I aiming to achieve with this project? Must I ensure total transparency in the supply chain? Whatever the decision, the vision must be fully supported by top management to ensure consistency throughout the team. Following on from this, Julien asked Julie whether defining your goals meant implementing actionable KPIs. Julie agreed, stating that specific KPIs must be created to make successful progress in a business. It is good to have both qualitative and quantitative, short term and long term KPIs.


What all parties highlighted was that transparency is vital in all aspects of your company operations. Being held accountable for your own actions heightens trust from the public, and Stripe acknowledges this by regularly posting blog posts defining their goals, challenges, and progress. And by being fully transparent, you then become an influence in the business world and motivate others to enact the same changes to make a bigger impact on the world and become more sustainable as a business.


When asked about a shift in the topic of environment and sustainability in business and how this differs for a small company, Julie responded that it would be of little point to a small business not to integrate a sustainable clause into their core values. The world is clearly moving towards seeing the environment as a vital topic of discussion, and it would therefore be detrimental to your business to not be aware of this and act accordingly. She believes that it is easier for a small business to become sustainable, as you are starting from a blank canvas. Larger more established organizations may have to change far more as the conversation is adapting rapidly and has been doing so for many years.


Jeremy then discussed how it may be easier for tech companies, be those larger or smaller, to become sustainable. Big tech players such as Microsoft prove this, as they have recently announced their commitment to becoming carbon neutral by 2030. What big tech companies are also realizing, is the importance of supporting initiatives that will have the most impact for the money you invest. And now, more than ever, tech companies and other businesses must be responsible for supporting smaller tech companies who are working to support the environment. This industry has always been a relatively low funded field, and now, with people being more reluctant to spend their money, tech companies must double down on their commitments and continue their support.


Julie then explained how she has seen a great increase in concern for business sustainability, with more businesses prioritizing strengthening their sustainability. In fact, the team at Ecovadis has seen an overwhelming increase in demand for product supply which risks workers’ rights. Countries such as Vietnam are seeing significant environmental risks, with an increase in both pollution and deforestation. Companies are greatly concerned by this, and so have begun to consider sustainability as one of their core values.


The panel concluded the talk with this final thought: when discussing sustainability, one is not merely suggesting that a business only focuses on reducing their negative impact on the environment, but rather that they support initiatives that work to positively affect the world and in some cases, reverse the effects that we have caused over hundreds of years.


Do not miss our next webinars or talks! Join our Meetup group now.